AGCO Corporation, the worldwide manufacturer and distributor of agricultural equipment including the Massey Ferguson, Fendt and Valtra tractor and machinery brands, has released the second 2020 Fendt Momentum Crop Tour field update. This update reports AGCO agronomists’ observations of tyre-track compaction on plant growth.
Soil compaction caused by wheel traffic is an increasing concern among farmers, especially due to the weight of high-capacity, central-fill planters on the centre transport wheels. Several studies have documented plant height reductions caused by compaction, which restricts root growth, limits nutrient and water uptake and ultimately lowers yield.
For example, researchers at Penn State1 reported that tyres inflated to 100 pounds per square inch created compaction that reduced corn plant height at six weeks after planting by 21% compared to the control (no compaction), reducing grain yield by 11%. See Figure 1. In contrast, the researchers noted that flotation-style tyres inflated to 36 psi “helped to reduce the effect of compaction on plant growth” to the extent that the crop height in that treatment was near that of the control.
In keeping with the 2020 AGCO Crop Tour goal to demonstrate the effects of and ways to minimize soil compaction at planting, AGCO agronomists have been observing crop development in plots in several states this summer. They recently recorded corn plant heights at growth stages after V12 to compare the compaction effects of various treatments.
In a plot near Casselton, North Dakota, they compared two planter tyre-pressure inflation rates: 55 psi, similar to the level for road transport, and automated inflation that maintained tyre pressure at approximately 17 psi. 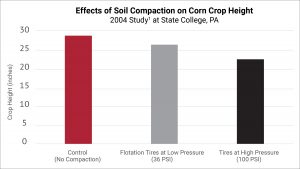 Jason Lee, AGCO agronomist and farm solutions specialist, measured plant height in the rows on either side of the in-line tandem centre transport tyres of the Fendt Momentum planter at low and high tyre inflation pressure. He observed a near 3-inch height advantage in corn planted with very high flexion (VF) tyres auto adjusted to maintain a low psi (approx. 17 psi), as opposed to the same tyres kept at a constant 55 psi. See Figure 2. 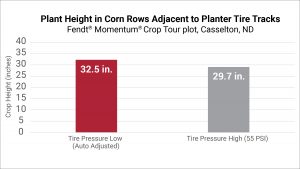 To illustrate the difference in soil compaction at different tyre inflation rates, this photo shows the footprints made by the same VF tyre at 55 psi on the left and 15 psi on the right, the minimum inflation recommended by the tyre manufacturer.
“Note that the length of the footprint increases as tyre pressure decreases, reducing pressure applied to the ground and therefore potential surface compaction,” Lee says. “A larger footprint reduces the pressure to the soil and therefore lessens the potential for surface compaction damage.” 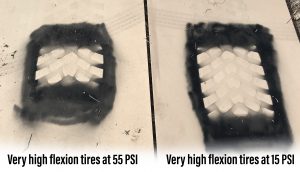 Evaluating correlation between plant height observations and yield
As the Casselton crop height observation suggests and many additional university studies have shown, tyre inflation can make a difference in compaction and resulting plant height. Lee says he looks forward to taking the AGCO Crop Tour plots to harvest to see how final yields match with in-season observations.
Lee also says producers may want to consider lowering the inflation level of tractor and implement tyres when possible before starting any field work. He acknowledges, however, that doing so means having an air compressor in the field and time to inflate tyres back to road levels before transport, unless the equipment has a central tyre inflation system, like VarioGrip™ on Fendt tractors or the tyre inflation system available on the Fendt Momentum planter.