The first fully electric-powered BMW X model has been announced. The Chinese-built BMW iX3 (WLTP combined test cycle: 0.0 l/100 km; electric power consumption combined: 19.5 – 18.5 kWh/100 km; CO2 emissions combined: 0 g/km) combines emissions-free travel, dynamic handling and performance with the comfort, functionality and spaciousness that customers would expect of a BMW Sports Activity Vehicle (SAV). The iX3 sees the BMW Group pressing ahead with its electrified model offensive set out in its NUMBER ONE > NEXT corporate strategy. The technological expertise amassed in the development of BMW i models is now coming to the fore in a fully-electric model from the core BMW brand.
The BMW X3 will be the brand’s first model to be available with a pure-electric drive system, a plug-in hybrid system or highly efficient petrol and diesel engines. This embodies the BMW Group “Power of Choice” strategic approach, with the company supporting the broad spread of customer requirements and statutory regulations around the world.
The new BMW iX3 is the result of many years of development work in the electric mobility field. The advances achieved since the market launch of the BMW i3 in 2013 now culminate in the company’s fifth-generation eDrive technology which comprises of a highly efficient electric motor, optimised energy density high-voltage battery and a high charging capacity. Thanks to the BMW Group’s longstanding investment in electric mobility, the use of disproportionately large batteries, which have a negative effect on vehicle weight, driving dynamics and electric power consumption, has been avoided in the development of this vehicle.
The new BMW iX3 will launch with an exclusive Premier edition for the IE market in summer next year. Pricing and standard specification details will be revealed in autumn 2020, with pre-ordering opening at the same time.
The iX3 will be launched in some worldwide markets later this year. It will be the brand’s first model to be built for export at the Shenyang plant in China, which is operated by the joint venture BMW Brilliance Automotive. 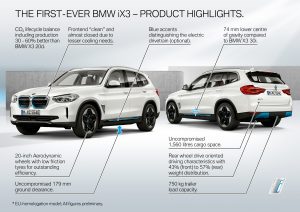 Fifth-generation BMW eDrive technology.
The premiere of the new iX3 marks the introduction of BMW Group’s fifth generation eDrive technology. Combining the latest electric motor, power electronics, charging technology and high-voltage battery, the fifth-generation system demonstrates clear progress in its performance characteristics, electric power consumption and range. These components, developed in-house by BMW Group, will also be fitted in the BMW iNEXT and BMW i4 models from 2021.
The new BMW iX3 has been designed for the current requirements of the electric vehicle market and with future advances in mind. BMW eDrive technology provides an outstanding basis for economically sustainable applications in volume production models.
The introduction of iX3 is well timed, with the enduring appeal of SAV models and rising worldwide demand for all-electric premium cars.
Highly integrated drive system technology.
The highly integrated drive system technology at the heart of the new BMW iX3 plays a particularly important role in optimising efficiency and power development. The electric motor, transmission and power electronics are now arranged together in a single housing. The electric motor in the new BMW iX3 works according to the principle of a current-excited synchronous motor, without the use of magnets. This design eliminates the use of rare earth materials of the motor.
The power density of the electric motor in the iX3 is 30 per cent greater than that of existing fully-electric vehicles within the BMW Group portfolio. The motor is up to 93 per cent efficient, compared with under 40 per cent for combustion engines. The new drive system unit generates maximum output of 286 hp and peak torque of 295 lb-ft which, unlike with many other electric motors, is sustained at high revs. The new BMW iX3 sprints from 0 to 100 kmph in 6.8 seconds, putting it in the same territory as the conventionally powered BMW X3 xDrive30i. Top speed is electronically limited to 180 kmph. Sending power to the rear wheels creates a characteristic BMW driving experience with outstanding traction ensured thanks to the standard-fit ARB technology (actuator contiguous wheel slip limitation).
Cutting-edge battery-cell technology plays a headline role in the latest development stage of high-voltage batteries. The storage capacity of the battery has been substantially increased, relative to the installation space required and its weight. The gravimetric energy density of the 188 prismatic cells in the new BMW iX3 is around 20 per cent higher than that of the battery cells used by the BMW Group in its fully-electric vehicles up to now. A gross energy content of 80 kWh – of which 74 kWh is utilised – and the high efficiency of the drive systems allow the new BMW iX3 to offer a range of up to 458 kilometres (WLTP test cycle).
Another technical highlight making its debut in iX3 thanks to BMW Group’s fifth-generation eDrive technology is the innovative new charging unit, which sends power to both the 400V battery and the 12V on-board power supply. When charging using alternating current, it enables both single-phase and three-phase charging at up to 11 kW. Plugging the vehicle into a direct current rapid-charging station opens the door to charging outputs of up to 150 kW, meaning the high-voltage battery can be charged from 0 to 80 per cent of its full capacity in 34 minutes. Drivers can inject the power required to add 100 kilometres to the car’s driving range (in the WLTP cycle) in just 10 minutes.