Due to autonomous technologies machines can move and operate freely also in the agricultural sector. Complete automation still is in the development stage, but we already see a lot of progress in the market. The HORSCH Maschinen GmbH, too, works on developments from automation to the point of autonomous driving systems. This is to allow for autonomous machines in agriculture in the future.

Michael and Philipp Horsch have been focussing on the topics automation and autonomous driving systems for quite some time. In the early 2000s they bought the first AutoFarm GPS steering system. It was the first RTK system which allowed for driving within the range of a centimetre. “When it worked, we immediately thought: If something like this works, we should also be able to drive completely autonomously. But at that time the project came to nothing. When we bought our test farm AgroVation in the Czech Republic, we had the chance to focus on CTF and track planning. We originally started with an agronomic point of view, but we soon realised that CTF first and foremost is about planning. This was another step towards autonomous driving systems“, Michael Horsch says. 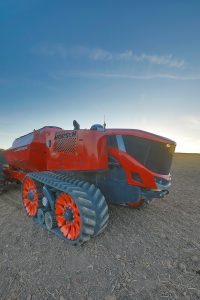 Many things which today are associated with the term autonomous Philipp Horsch would rather call automation. First of all, the processes in the field are automated and the achievement potential is used to full capacity. “Let’s take the example of a tractor that drives with GPS and can reverse on its own – for a start this only is an automation step, there is still somebody sitting on the machine who controls it. Autonomous means that there really is no driver. And we are talking about different vehicles, i. e. without a cabin on it. And what is extremely important: Automation comes before autonomous driving. It definitely is the first step. As automation has been an important topic for years, we have been making good progress. However, there still are quite some hurdles to clear until we reach complete autonomy”, he explains.

To be able to work in a partially autonomous way today, there mainly are three special requirements: the track planning system, geofencing, i.e. a digital fence, as well as the safety topic. “Today we solve it by placing a “driver“ with a remote control in the field whose task it is to monitor everything and to intervene in case of emergency. The remote control is authorised for a range of 500 m. These three aspects are important to make sure that we soon can work in the field in a partially autonomous way and be safe”, Philipp Horsch says. The next step will be the sensor system so that the machine can be monitored, e.g. a clogging detection. “From a technical point of view, we are working on different concepts, for at the moment we still do not know what will stand the test and in which conditions. What we know is that we have to take the different concepts into the field, exercise respectively, learn and develop further. In any case, our approach is free from any bias”, Horsch adds

However, for putting autonomous driving systems into practice it is not only the technical innovations that are important, but also the current legal situation. At the moment, the legislator treats road and field as equal. But in Michael Horsch’s opinion there are differences especially with regard to the different speeds on road and in the field or to the topic of opposing traffic. “The need for a re-definition and the public pressure to finally create appropriate framework conditions is enormous. If we separated road and field, we could get started in the field much faster.” Another point he considers to be essential is the possibility of the homologation of the safety concept, i.e. camera systems, radar and lidar systems. “We hope that in the next few years the safety systems will have developed in such a way that they can be homologised, for from a technical point of view we are ready. All this is perfectly sufficient for a test farm, for this is where we want to gather experiences, test machines and integrate them into the farm processes”, Michael Horsch states.

In the future, too, the technical realisation will mainly be borne by the next generations who grow up with today’s digital conditions. You can already notice the changes. “The time of the generation – that by the way I also belong to – that is into fully air-conditioned cabins and a showy bonnet is coming to an end. The next generation is already waiting in the wings, is 14 to 18 years old and digitally native. The ability to deal with touchscreens, smartphones and tablets is almost innate. These young people control everything that moves completely intuitively and without ever having read a user manual. The users are already there. We have to meet the requirements”, Michael Horsch comments. HORSCH will continue to work on these requirements and thus, there will again and again be updates and further developments in the course of the projects.