So says Luca Gabaldo, owner of the Italian agricultural business of the same name, a BKT user and above all spokesperson for the everyday needs of the sector: from reducing fuel consumption to investment in technology.
This is the story of Luca Gabaldo, the sole owner of Azienda Agricola Gabaldo Luca and a third-generation farmer and contractor from Bologna who is keeping up the work started by his grandfather. Luca firmly maintains the tradition and around 10 years ago set up his own company, specializing in crops and seeds, cereals and vineyards. His farm is in the province of Bologna, in Italy.
Despite Azienda Agricola Gabaldo Luca being a small company, the machines used are cutting-edge: “There is always room for improvement because the technology is racing ahead” – Luca states – “we are using GPS guidance and power-steering. At first sight that might see a significant cost for the company to bear, but later it means real savings. In just a few years even a small company has a return on their investment in terms of optimizing their work. If the item of machinery works flat out and correctly, all the work is optimized, making it more productive.”
Luca uses a 250hp New Holland tractor and a 110hp Same tractor. The former has been fitted out with BKT tyres AGRIMAX V-FLECTO: with VF 600/60 R 30 NRO on the front and VF 710/60 R 42 NRO at the rear. 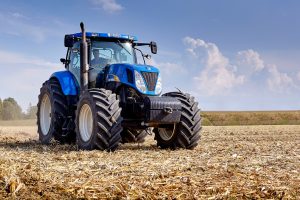 Luca was one of the first people in Italy to try out this latest generation tyre, which makes use of NRO (Narrow Rim Option) Technology, conforming to the new experimental standards set by the European Tyre and Rim Technology Organization (ETRTO). This marking makes it possible to use the recommended rims in the standard size and not dedicated rims which are instead needed for VF tyres of the same size.
AGRIMAX V-FLECTO, improves the performance of latest generation tractors thanks to reduced soil compaction and higher load capacity (+40%) at the same pressure as a standard tyre of the same size. It is a product which guarantees at least an extra 10% added to the life cycle compared to its standard equivalent, guaranteeing a marked reduction in operating and maintenance costs.
The performance of AGRIMAX V-FLECTO fully meets Luca’s needs: “These tyres respond very well, above all in terms of traction and consumption. They are truly premium products and I am more than satisfied by the result.”
The decision to use BKT also arose from the suggestion and advice of Luca’s trusted tyre specialist: Marabini Gomme di Medicina (Bologna). Marabini discovered BKT’s quality thanks to the consultancy of Univergomma, the distributor of BKT agricultural products in Italy. 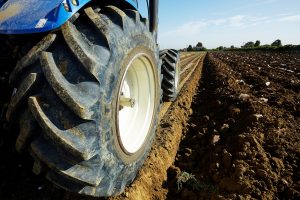 This, however, is not the first experience between Luca Gabaldo and BKT, their “relationship” dates back to 2010 when the Same 110hp tractor was fitted with rowcrop tyres from the AGRIMAX range made by BKT. Luca thus discovered their qualities and benefits, above all in terms of wear and tear which reduced considerably, thus prolonging the life cycle of the product. Given the results Luca chose to also fit the New Holland tractor with the latest generation products AGRIMAX V-FLECTO.
“Having good quality tyres means a lot for us, because it means a saving in fuel and operating times, as well as reducing costs over the years. I have opted for BKT because I am satisfied by the product. The tyres have excellent grip and traction, a low consumption level, I have been using them for three years and they have provided excellent results in all aspects, bar none. And in this job, with good tyres, you’re already halfway there.”

0 replies on “In this job, with good tyres, you’re already halfway there – Italian contractor”