A new range of telescopic wheeled loaders that set new performance standards has been launched by JCB with an industry-first 50kph eight-speed powershift transmission and the most powerful engine in a machine of this type.

Together with a new cab that gives the operator outstanding visibility, these developments feature in the 173hp TM420S, a new flagship model for JCB’s ‘Stage V’ telescopic wheeled loader line-up.

They all feature the new cab with a one-piece windscreen extending into the roof for much-improved upwards visibility, an increase in total glass area and a rear view camera, plus illuminated steps and a courtesy delay when the lights are switched off in the dark.

The TM320 gets more power at 130hp while outputs for the TM320S and TM420 rise to 150hp, and all models have the new fuel-saving Autostop feature for JCB 448 DieselMAX engine that avoids wasteful prolonged periods at idle speed.

As standard, the range-topping TM420S with its 173hp engine comes with a 50kph version of JCB’s new eight-speed auto Powershift transmission, with Torquelock direct drive in every gear.

The TM320S can have this transmission as an option but otherwise is equipped with the 40kph version also used in the TM320 and TM420 that has Torquelock in forward gears five to eight.

In auto mode, the transmission responds to light use of the accelerator pedal by shifting up and down at a relatively steady engine speed for optimum fuel economy, but more aggressive pedal use results in delayed up-shifts to exploit the full power and torque available at higher revs for maximum acceleration and productivity.

Forwards visibility from the new Command Plus cab is effectively increased by 13% while the overhead glazed area is 52% larger than before thanks to the one-piece windscreen that sweeps up and over the operator’s head, where an optional roof wiper keeps the maximum area of glass clean.

Inside the cab, the new ‘memory’ steering column can be pushed away to leave and enter the cab more easily, the cab steps are illuminated, and having parked the machine in the dark, the programmable 360-degree lighting can remain switched on for a while before turning off automatically.

An assignable ‘hot key’ button on the hydraulics control joystick is a new feature that can be used for switching between transmission auto and manual modes, torque lock-up engage/disengage and auxiliary hydraulic valve control.

Alternatively, it can be given the task of muting the radio, answering or hanging up calls on a Bluetooth-connected mobile phone, or acting as a master switch for the work lights.

All new TM telescopic loaders now have a pressure release control inside and outside the cab as well as at the boom end for easier implement change-overs. 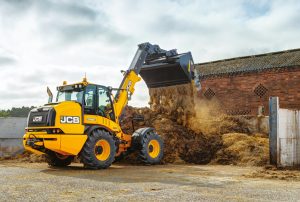 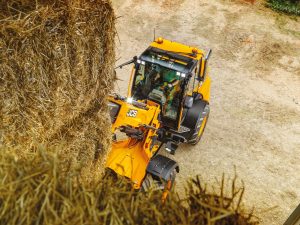