Massey Ferguson’s 100 Series tractors have become known as the Red Giants. These tractors were hugely important for Massey Ferguson as it set out to compete against three other new tractor ranges introduced that year. They were also hugely important for Irish farmers as they provided a strong and reliable power source that drove farming ahead in the years immediately after we had joined the European Economic Community (EEC) as it was known back then.

While the Massey Ferguson 35 and 65 were successful tractors the company established a Massey Ferguson Corporate Co-ordinating Committee in 1962 to look at what was needed to meet the competition from other manufactures. The result was the DX -line (100 & 1000). There were three major points for the new line. The aim was to develop a new line of tractors and not upgrading the old models. This new line was to include tractors in the highest horsepower range that could be designed and produced in the most economical locations, and as similar as possible for the different markets.

Against the background where Ford launched the 1000 Series, and David Brown and Nuffield both also introduced new ranges of tractors, Massey Ferguson’s 100 Series models were a very impressive response. There were four new Massey Ferguson tractor models introduced to the market for the Smithfield Show 1964 held in London, all of which were also shown to Irish farmers for the first time the following year at the 1965 RDS Spring Show in Dublin.

The tractors were the MF 130, MF 135, MF 165 and MF 175. The entry level MF 130 tractor was built in France, while the other three models were built at what was one of the world’s largest tractor factories, at Banner Lane, Coventry, England. Massey Ferguson kept the designs simple and shied away from complex hydrostatic transmissions, keeping a basic 6 forward and 2 reverse speed gearbox for all of the Coventry built tractors. 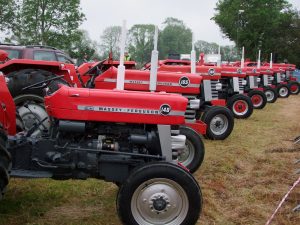 The most significant change for the tractors was the introduction of the new hydraulic system for the bigger tractors. Massey Ferguson introduced a Pressure Control System which was designed to give additional traction by means of a weight transfer system. This was achieved through a special linkage hitch which had a chain attached, that was fixed to the drawbar of the implement being pulled. The system proved not very popular at the time and even for many years later.