This week Nissan unveiled the latest version of the Nissan Qashqai, one of Nissan’s and Ireland’s most popular cars. This is the third generation of the Qashqai which in a design sense is significantly more modern. The new car is still clearly identified as a Qashqai as Michael Moroney found out during a pre-view of the car in Naas this week.

The new design is a stunning style upgrade from the original version introduced in 2007. You would have to be impressed by the new shape while conceding that the current version is not considered dated, in my view.

The more significant news for Qashqai drivers is diesel power is no longer an option. For the new Qashqai, Nissan will offer two drive options, either a 1.3 litre petrol engine version with a mild hybrid drive or a new e-Power engine system where a 1.5 litre petrol engine is used to create electric power, that in turn powers the wheels and every other aspect of the car.

Nissan claims that its 12V mild hybrid system based around an updated version of the 1.3 litre Dig-T petrol engine that was introduced to Qashqai in 2018, is a more affordable hybrid technology. This system claims to provide torque assist, extended idle stop, quick restart and coasting stop (for Xtronic versions only), with improvements to both fuel economy and CO2 output.

Nissan will offer this 1.3 litre petrol motor will be offered with two power outputs, 138hp and 156hp, with either a 6-speed manual transmission, or new Xtronic gearbox for the higher power versions only. This engine achieves its maximum power at 5500rpm, while the maximum torque of 270Nm kicks in a 1750rpm on 156hp Xtronic and higher power manual gearbox versions.

That means managing the engine revs will be a key part of achieving the rated fuel consumption figures. Nissan is claiming that the system will shave about 4g/km relative to the current petrol engine version. That’s not a lot of fuel economy saving partly because despite the fact that Nissan has developed a lighter while stronger vehicle platform the mild hybrid system adds 22kg to the overall vehicle weight.

Nissan claims that the manual versions the gearbox has been enhanced for a quicker, more direct shift feeling. The company claims that the new generation Xtronic transmission offers better fuel economy and acceleration feel thanks to improvements including a twin oil pump system with new electrical oil pump.

2WD is available on both 138hp and 156hp versions, whilst 4WD will only be available on 156hp Xtronic models. Nissan has a new 4WD control system and driving selection mode that provides five driving modes, Standard, ECO, Sport, Snow and Off-Road. The reaction time to respond to any wheel slip, is claimed to have been reduced by a factor of five to around 0.2 seconds.

The more significant change is the arrival of the new Qashqai’s e-POWER system. This system uses a petrol engine only to generate electricity, while the wheels are completely driven by the electric motor.  Nissan claims that this unique solution provides the enjoyment of driving electric without having to worry about range or charging.

The new Qashqai’s e-POWER system is comprised of a high-output battery and combined with a new 1.5 litre, 154hp petrol engine, power generator, inverter and large capacity 140kW electric motor (equivalent to about 187hp) which is of similar size and power output to that found in Nissan’s electric vehicles.

The Qashqai e-POWER versions will also have the benefits of a new ‘one-pedal’ driving experience called e-Pedal. This was introduced in the Leaf and it allows drivers to start, accelerate and decelerate using only the accelerator pedal.

Unfortunately, Nissan has not yet published fuel economy figures for either power options despite claims of significant fuel economy benefits. The bigger benefits are in terms of CO2 ratings, which brings them into line with much of the competition.

There are lots of changes under the skin of the new Qashqai that won’t be immediately obvious to the driver. The front and rear doors, front fenders and hood, are all now made of aluminium, while to boot is made from a composite material, all of which Nissan claims offers a weight-saving of 21kg over the out-going Qashqai’s body.

The new Qashqai has a longer wheelbase that creates more room inside. Its impressive that the rear doors now open to almost 90 degrees, for easier access to babies and toddlers in child-seats. The boot capacity has increased by over 50 litres from the previous generation. And a powered hands-free tailgate is now an option.

This new Qashqai has an upgraded infotainment system with a broad portfolio of connected devices including integration of smartphones, in-car Wi-Fi for up to seven devices and NissanConnect Services, a dedicated app with which to interact with and monitor the vehicle.

There is a new optional 10.8-inch Head-Up Display (HUD) that Nissan claims provides the biggest-in-segment image size. Key navigation, driver assistance and road information are projected onto the windscreen within the driver’s line of vision. Home-to-Car features are compatible with Google Assistant and Amazon Alexa devices.

We will still have to wait a few weeks for the final pricing to be announced for this new Qashqai, which will be available in Ireland from June this year. By then I also expect to have test drive report for you. 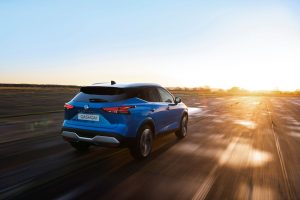 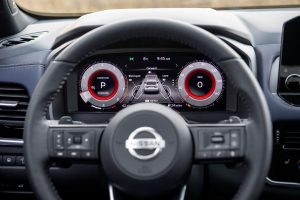 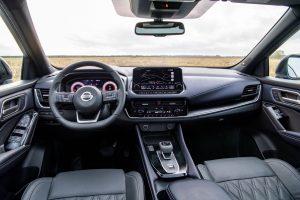