Mounting a TEGOSEM 500 cover crop sowing unit on a TERRASEM mulch seed drill lets you apply an additional companion crop or micro-granule component while drilling seed and depositing fertiliser using the seed coulters and fertiliser coulters on the seed drill, according to Pöttinger. Space-saving, easily accessible using the loading platform, mounted in front of the seed hopper, the pneumatic sowing unit covers a wide range of applications.

In addition to surface application, Pöttinger claims that the TEGOSEM can also feed the additional component directly into the metering system in the single shoot process. Fertiliser and micro-granules can then be deposited directly with the seed, promoting ideal development of the crop during germination and emergence.

Surface application is used for companion crops such as grass and is carried out between the tyre packer and the coulter rail. This increases the degree of ground cover so that water losses are greatly minimized.

Seed distribution on the TEGOSEM is pneumatic and can be controlled conveniently using the terminal. Metering is started and stopped by the central metering unit on the TERRASEM. Two different metering wheels can be used as standard: one for larger seeds such as cereals, lupins, peas and beans, and the other for fine seeds such as clover and cress.

In the single shoot process, the additional components are added to the TERRASEM seed flow by the metering system. Changing between single shoot and surface application is done conveniently by switching two distributors in the seed line.

The single shoot process uses the proven DUAL DISC coulters. Pöttinger claims that this prevents the seed and fertiliser or micro-granulate and additional component from bridging. Optimum seed placement is the result. The seed is placed behind the tyre packer using baffle plates for the best distribution. The risk of fine seed drifting is avoided by spreading the seed close to the ground.

In addition to being mounted on TERRASEM mulch seed drills, TEGOSEM units can also be used on LION power harrows, TERRADISC disc harrows, or SYNKRO stubble cultivators. This avoids unnecessary passes to complete the sowing process while saving resources. 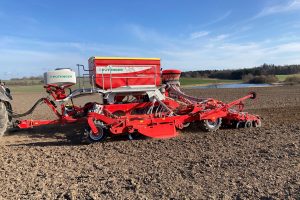