Pottinger has had an interesting 50-year history in Ireland. The first Pottinger silage wagons were imported into Ireland in the 1970’s by McGee’s of Ardee, then one of Ireland largest farm machinery importing companies. The machines were quickly accepted by farmers and emerging contractors who were mainly using single and double chop silage harvesters at the time. The wagon was seen as a machine that offered farmers a low cost silage making alternative.

Towards the end of the 1970’s there was a lot of advice given to farmers to buy wagons and make their own silage. Contractors and farmers responded and it resulted in a significant increase in supplies of silage wagons from three dominant manufacturers at the time. These included Krone, imported by Farmhand, Fella imported by Land & Dairy Services, Claas imported by Harvest Machinery and Pottinger imported by McGee’s of Ardee.

By the late 1970’s there was an abundant supply of silage wagons on the market, and they were mainly geared towards the farmer owner market. Machine reliability was a problem when trying to harvest heavy wet Irish grass especially after the good results from the dry summers of 1974 to 1977. This was compounded by the fact that many farm advisors were expressing unsubstantiated doubts about the ability of the machines to make quality silage. The result was that the market for silage wagons plummeted. The importers, with the support of the Farm Tractor and Machinery Trade Association (FTMTA) requested an urgent meeting with the then director of ACOT (now Teagasc), the late Dr. Tom Walsh. The machinery industry group which included the late Paddy McGee, McGee’s of Ardee and Denis Scrivener, Farmhand, Chris Young of Harvest Machinery and Paddy Condon of Land & Diary Services, were somewhat bamboozled by Dr. Walsh who avoided the specifics of the issues around the machinery advice being given. He quickly treated the machinery importers to a lengthy and exhausting lecture on the science of silage making. The group left the meeting exasperated and felt no support. The silage wagon market dwindled for a period without the support of the ACOT and its farm advisors.

The late Tom Traynor of Traynor’s of Finglas acquired the Pottinger agency in the 1980’s and began a significant drive to promote the wagons once again. When Traynor’s sadly closed their North Road Fingas business (now the site of Joe Duffy Motors) in 1986, they took the Pottinger franchise with them for a period to Ashbourne and then to Cahir in Tipperary before opening their premises in Clonmel. I remember attending one of first public demonstrations organised by the late Tom Traynor when they had moved to Clonmel, but sadly the hugely energetic Tom was soon to pass away.

The Traynor family, under the stewardship of his wife Eileen, and joined by sons Thomas and Philip and their team, continued to put huge efforts into re-establishing the silage wagon market in Ireland with the significant support of Pottinger. Larger contractor machines were developed and began to prove their ability to deliver high output and more reliability. A new generation of contractor machines paved the way for the creation of a new market which now continues to be dominated by the Pottinger brand as the leading silage wagon on the Irish market.

Traynors continued the represent Pottinger in Ireland until 2012 when the Austrian company took over the business directly and established Pottinger Ireland, a subsidiary of Pottinger Austria. In 2020 Pottinger Ireland has moved to a new, purpose-built premises on Clonmel’s ring road, with Diarmuid Claridge, general manager, to expand its market share and take account of an increasing range of machinery on offer to Irish contractors and farmers. 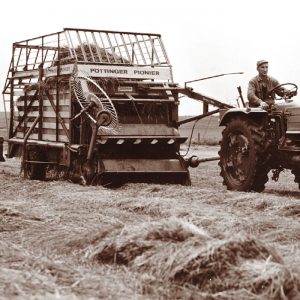