The Axion 800 is the latest in the Claas tractor range to make the move to being powered by a Stage V compliant engines. In addition to this move to the latest emission standard, users will also benefit from a number of specification upgrades.
Maximum power outputs from the FPT engines used by the five model range remain the same, rising from 205hp for the Axion 800 to 295hp for the Axion 870, but as part of the move to Stage V there is a slight increase in the torque curve, so giving more low down torque.
Externally, these new Stage V models are denoted by the new bonnet detailing first introduced on the new Arion 600/500 range last year. Internally the operator benefits from a number of new features that provide both greater functionality but also greater comfort over long working days. 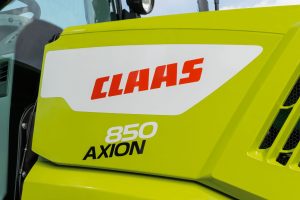 As with the Arion, standard across all Axion 800 models will be the latest Cebis Touch terminal with integrated Isobus UT, so allowing it to be used as a universal implement control terminal. A separate terminal, such as the Claas S10, will still be need for more advance Isobus functions such as TC Geo for mapping and variable applications or TC SC for section control.
Other new features within the Cebis Touch terminal include a USB socket for importing/exporting data, an upgrade to the implement settings and storage function, a reading for the average wheelslip, the ability to view external cameras through the CEBIS screen and greater customisation of the screen layout to suit individual operator preferences.
In addition to the standard hydraulic flow of 110 litres/minute with an option of 150 l/m, there is now a further option of a 205 l/m hydraulic system. An engine speed memo button can also now be linked to the external PTO button through Cebis, and the PTO system itself now features an uprated 7-plate PTO clutch for greater durability with heavy load implements. 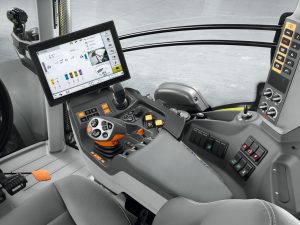 In the cab, there is now the option of a leather steering wheel, which will be standard in higher specification Cebis Extra Leather Pack versions. For greater comfort, a Grammer EVO Dual Motion seat is also now available, which is heated, ventilated and comes with a tilting headrest. As standard, twin brake pedals will now be fitted along with a tinted rear window. Externally, the Axion 800 is now fitted with LED flashing lights and a flexible bottom step.