As previously reported by the UK Agricultural Engineers Association (AEA), the total number of agricultural tractors (power over 50hp) registered for road use in the first half of 2020 was 5,195, almost a quarter lower than in the equivalent period last year. AEA is now releasing figures showing how registrations have changed in terms of power bands and UK regions.
A decline was apparent across all power bands, except for the most high-powered machines. All broad bands below 160hp (and over 50hp) saw a fall of between a quarter and a third in the first six months of this year, compared with January-June 2019. The drop was slightly smaller above this power level but only machines above 320hp saw a rise in registrations, being up 9% year on year. This pattern suggests that the unusual decline in average tractor power seen in 2019 will be reversed this year. The average power of tractors (over 50hp) registered in the latest six months was just over 170hp, up by nearly 5hp on the same period last year.
The most popular tractor power band remains between 161 and 200hp. It is interesting that larger tractors over 321hp were the only group to record a sales increase, up from 154 units to 168 for the first six months of 2020. The power band between 121 and 140hp recorded the biggest decrease of over 30%. 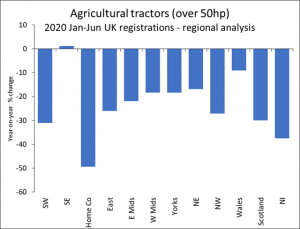 At regional level, registrations across the UK declined by 17% or more almost everywhere, with the sharpest falls in the Home Counties (down by 49%) and Northern Ireland (-38%). Only 218 new tractors were registered in Northern Ireland so far in 2020 compared with 349 for the January to June period 2019.
There were only two exceptions to the picture of sharp declines; Wales saw a drop of just 9%, while registrations in the South East were actually up 1%.